More injuries occur in the shower... 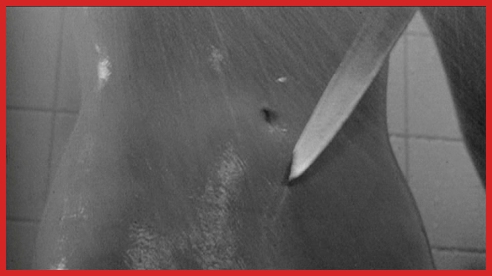 It is commonly but incorrectly believed that the knife is never shown touching flesh in Alfred Hitchcock's infamous Psycho shower scene. The wonders of DVD techonology make it easily possible to see that the knife does penetrate during three consecutive frames, making for a very quick knife-in-flesh scene. The myth of the knife never touching has been perpetuated by Psycho screenwriter Joseph Stefano, shower girl Janet Leigh, and Alfie himself.

Joseph Stefano at E! Online : "Actually, it never touches the skin...And the whole scene goes so fast, you think you see more than you do."

Janet Leigh at The Astounding B Monster : "People swear they saw the knife go in, but they never showed that -- it was not allowed."

The 10-frame sequence below includes the gut-wrenching frames in question.