A reader takes exception to a debunking story:

On the Incidence of Alligators and Hard Times 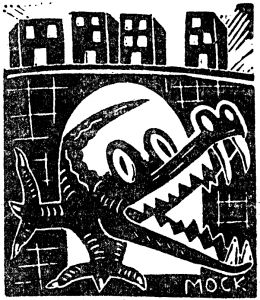 Anna Quindlen's May 19 news story "Debunking the Myth of Subterranean Saurians" did a great disservice to true believers. John Flaherty (Chief of design in the New York City Bureau of Sewers), whom she quotes, professes that "there are no alligators in the New York City sewer system." I protest!

No less a source than "All the News That's Fit to Print" reported a veritable rash of "saurian sightings" in the city sewers through the 1930's. Our research on this subject is limited, because, in truth, we were looking for giraffes. The alligators were serendipitous.

At any rate, we refer Miss Quindlen and Mr. Flaherty to The Times for Feb. 10, 1935, which reports a brave lad, Salvatore Condulucci, and his friends attacking an eight-foot alligator with snow shovels on East 123d Street. Some other reports that appeared in The Times:

As I have suggested in our newsletter, Coastlines, there may be a relationship between economic hard times and an outpouring of alligators, as evidenced by the reports in The Times. Perhaps Mr. Flaherty should become prepared.