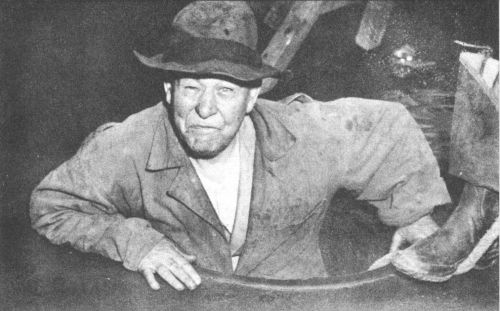 When Teddy May wasn't busy hunting sewergators, he was recovering a $25,000 ring lost by General Grant's daughter, or producing evidence from the sewers to put the criminal element in its place, or testifying as an expert witness in civil and criminal cases, or, at the very least, convincing author Robert Daley of his heroic exploits.

Crude and coarse though Teddy may have been, the sewergator legend wouldn't be what it is today without the help of his unique imagination. We hope he's happily spitting tobacco juice in that Great Catch Basin in the sky.


As long as there are sewers in New York, the men who work them will talk about Teddy may--of how he knew sewers so well that he could look at a manhole cover and tell you exactly where the break was; of how he once plunged into a flooded sewer to drag out a half-drowned comrade; of how he tracked down murder weapons, loot and other evidence which had been tossed into sewers, then gave testimony in court that put dozens of crooks behind bars; of how, during his hundreds of court appearances as expert witness in both criminal and civil cases, he used to shout or growl at attorneys, juries and even judges as if they were sewer workers. Teddy May put on airs for no man.

Teddy May was a little man, not much over five feet two. His voice was loud and rasping, his speech picturesque and his grammar atrocious, but he knew every turn and joint of New York's 560 miles of sewers. The sewers were his domain, one he guarded jealously, and he reigned below ground like a king.

For his Napoleonesque manner he was unpopular with his men. "Chew-tobacco Teddy" they called him, though not to his face. Having only a few teeth, he chewed with his gums. He had no control over his right eyelid, either. It hung half shut like a broken shade. He got the bad eye one icy cold day in 1925 when a steam line broke. Teddy crawled in to fix it, the steam blowing off at three hundred degrees. When he climbed outside again the temperature was nine degrees and the change, said Teddy, paralyzed his right lid.

"Lost four days in fifty-one years on the job because of the eye," he once growled. "It closes up in the winter, but it never bothers me except when I chew tobacco on my right side and I miss and it hits my coat."

He was fond of giving salty speeches at union or political meetings, peppering the air with Teddy Mayisms. Linoleum, to Teddy was "rineoleum," and he sometimes spoke also of "sympathy" orchestras, "horowitzers," and of two men "getting between ya."

Another time, Teddy entered the office of a borough president, seeking raises for some of his men. The sewer man's plea was as graphic as it was ungrammatical, and when it was finished the Borough President remarked: "It's easy to see that you are a keen student of the English language."

The sarcasm was not lost on Teddy.

"I'll tell you who I am," he snapped. "I'm the guy who carries the cripples and old ladies down the fire escapes to the polls to vote to put bums like you in office. That's who I am."


Yes, Professor, there really was a Teddy May...almost as much of a legend as the New York City Sewer Alligator [Alligator cloaca novum eboracum] itself....[He] was a sewer worker who, in the fullness of time, rose to become a Foreman or, perhaps, a District Foreman.... From what I can gather, Teddy was a very outgoing, ebullient man with a wide circle of friends and an even wider circle of admiring acquaintances. Part of his charm was his undoubted abilities as a raconteur and a spinner of yarns.

-- John T. Flaherty, Chief, Division of Sewer Design, Bureau of Sewers, NYC Department of Environmental Protection (as quoted by Jan Harold Brunvand in Too Good to Be True [W.W. Norton and Co., 1999])

Note: With all due respect to Mr. Flaherty, we believe Alligator cloacensis to be the proper taxonomic designation for the sewergator.


I didn't know Teddy May but recently heard from an "old-timer" who did. He described him as follows, "...I remember working on 42nd Street late in the day when along came Teddy May, I first thought that he was a bum. One of the laborers that was close to him asked if he could help him. You would not believe the way he carried on. I mean loud. 'Don't you know who I am?'... He wore a dirty black short coat and a slough hat that went through the war. When the job was completed, he took us into Horn and Hardart saying just follow me and in we went to the back of the food container. Yelling at the top of his voice, 'Help yourself boys.' He disappeared and I only saw him one other time after that. I think he retired the following year, 1954, '55. He told us that night that he had all the sewer maps home in his house and that the City would have to pay dear to get them." 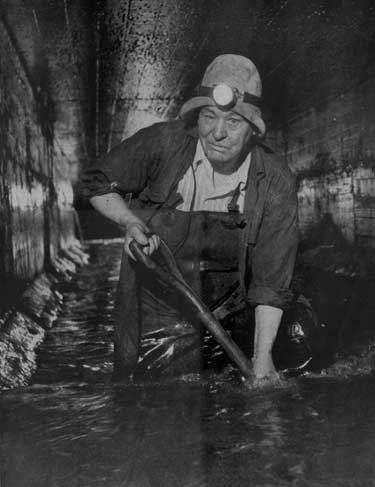 Teddy at work, from Life Magazine
(Thanks to Sewerfriend Julia Solis for this picture)